The DJ revealed how she was abused by Andile Mpisane who is the son of the businesswoman; she claimed she was beaten to a pulp and also lost a pregnancy during their relationship.

In a statement released on Wednesday night, Shauwn said Sithelo’s allegations were false and she went legal against her.

However, the DJ returned with another evidence, as she shared a screenshot of her chat with Shauwn who appears to be aware of the abuse the baby mama suffered at the hands of her son.

Read the chat below: 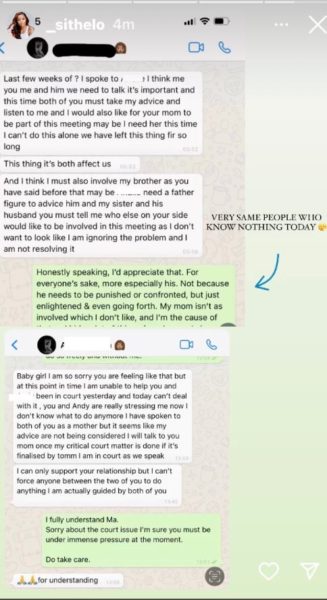 Since Sithelo came out to share her story, lots of GBV organisations and women have stood up in her support, while the Mkhize’s family get trolled and canceled.

#Mamkhize ‘s statement screams enabler. Not once did she address her son threatening to call a hit on sithelo or even him refusing for her to see her child. All she cares about are allegations because y’all made her think she’s some sort of a celebrity.

I dont care what #Mamkhize says. Andile is abusive! We heard how he speaks to Sithelo. That is an abusive man. Mamkhize should’ve spent her coins with therapists for her son and now lawyers against the baby mama. That’s how she could fix the problem